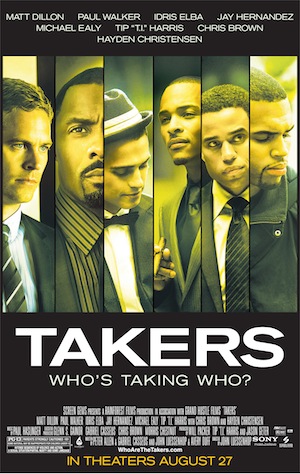 Takers is a 2010 crime/action movie starring Idris Elba, Matt Dillon, Paul Walker, Michael Ealy, Hayden Christensen, Chris Brown and Zoe Saldaña. A crew of criminals led by Gordon Cozier (Elba) pull off a successful Los Angeles bank heist in broad daylight. Before they can enjoy the money, "Ghost" (T.I.), a former member who got caught in a job and gets out of prison after five years. He tells them he got info from Russian mobsters about an armored car carrying 20 million dollars. Even though Ghost didn't rat them out while in jail, the others are not sure they can trust him. Meanwhile, a pair of detectives (Dillon and Hernandez) investigating the first robbery, are hot on their trail.