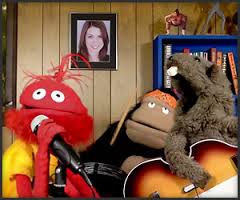 is a Video Blog focusing on two puppets, Mario and Fafa the Groundhog. They often discuss things that are going on, in both their lives and in the world, from the Zombie Apocalypse to Time Travel to Twinkies.

The show was created by Damien Eckhardt-Jacobi (Mario) and Vincent Bova (Fafa), two street performers who used puppets to entertain people on the New York City subway. Met with variable success, they began posting videos in 2004 with a style that was reminiscent of a pastiche of early edutainment shows like Sesame Street and The Electric Company (1971), complete with some music videos. The show was on hiatus until 2010, at which time the format received some changes in technology and switched to a slightly older demographic, with more references to pop culture and the like.

In 2012, Glove and Boots won a Twitter Shorty Award for Best Videoblogger.

Underwent a minor overhaul in 2017, introducing a gaming channel and 4 new recurring segments:

In late 2017, the channel ran into money troubles due to changes in the YouTube algorithm (mainly the site cracking down on anything their advertisers deem inappropriate for children, and Glove and Boots unfortunately tends to fall into the Animation Age Ghetto) and in video sharing on Facebook, and was forced to go on hiatus. After more than a year, they announced in December 2018 that they would start making new content focusing on appealing to a younger audience.

, and their (sadly now inactive) gaming channel can be found here

. Videos up to Season 7 from both the main channel and gaming channel are also available on Vimeo

, including some that were removed from YouTube to fit with the changes made in 2018 and 2019.

As of December 2020, the channel along with all of its social media platforms are currently inactive, most likely because of YouTube's policy enforced by COPPA (Children's Online Privacy Protection Act), the global COVID-19 Pandemic, "The Ring-A-Tangs" YouTube Channel, and the departure of puppeteer, Vincent Bova who moved away from New York (where the show was filmed) to Pennsylvania in August 2020. Their most recent video was uploaded on December 30, 2019.

"Why is there a picture of Thomas Jefferson in the Darth Vader Helmet on the PETA homepage?"

"Why is there a picture of Thomas Jefferson in the Darth Vader Helmet on the PETA homepage?"