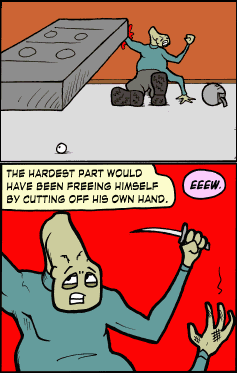 "The chain in those handcuffs is high-tensile steel. It'd take you ten minutes to hack through it with [a hacksaw]. Now, if you're lucky, you could hack through your ankle in five minutes. Go."
— Max, Mad Max
Advertisement:

A version of the Sadistic Choice when a person is forced to make a terrible choice — they need to remove one of their appendages in order to escape with their life. Sometimes a villain or '90s Anti-Hero imposes this choice as a punishment, but in other cases, a character is simply trapped.

Many animals will do this to escape traps in real life. Note that even if a person manages this, realistically they will bleed to death (which might be just what the villain has intended) in a few minutes unless they are able to close the wound, so only try this if you have a plan for doing that. If you're lucky (in a sense), one of your Artificial Limbs is the limb that got trapped, so you can pull off a Fake Arm Disarm without any real injury to yourself and then get a replacement later.

Amputation Stops Spread is similar but to stop poisoning or infection instead of escaping. Compare Disposable Vehicle Section, when a similar thing happens with vehicles, as well as the somewhat less drastic Giving Them the Strip, where escaping requires abandoning at least one article of clothing.