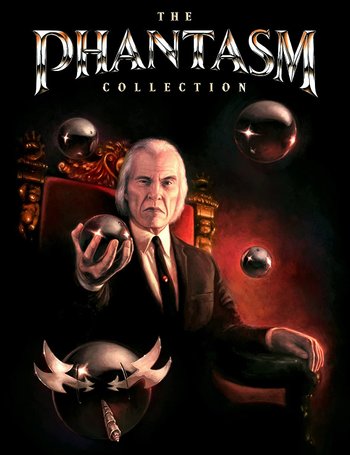 "You play a good game, boy. But the game is finished.
Now You Die!"
"Where he came from, nobody knows. His evil spread like a plague, destroying towns, maiming and killing. We called him The Tall Man; at first we thought he was just an undertaker. His hordes pillaged graveyards, rooted up the bodies, and spirited off the dead to a place worse than Hell."
— Reggie, Phantasm: Oblivion
Advertisement:

Indie game developer End Transmission Games released a free tabletop RPG set in the Phantasm universe in 2010. The game is meant to invoke grindhouse horror, and also allows groups to include elements from other horror movies like Hellraiser, and From Dusk Till Dawn.