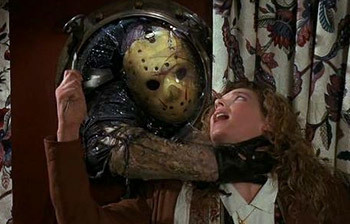 Marshal Martin: Get away from the window. How many times I got to tell you? Tubby!
Tubby: (turning away from window) My name...is Lawrence!
Marshal Martin: All right. Lawrence...Larry...please, for the love of God! GET AWAY FROM THE GODDAMN WINDOW!
[Tubby gets shot through the window]
— In a Valley of Violence (2016)
Advertisement:

In the horror genre, windows are not the safest thing. They're mostly thin breakable glass, often big enough to let monsters and crazed madmen use it as an improvised entrance and make for a nice spot to grab unsuspecting victims to their doom. Soft Glass trope seems to be in effect as such monsters or madmen are rarely harmed by breaking them with their bare hands. Barricading windows can be hard work if there are too many of them and more often than not whatever is trying to get through, will.

Compare Super Window Jump and Destination Defenestration, in which windows are used for for improvised entrances, deliveries and exits, rather than monsters using them.