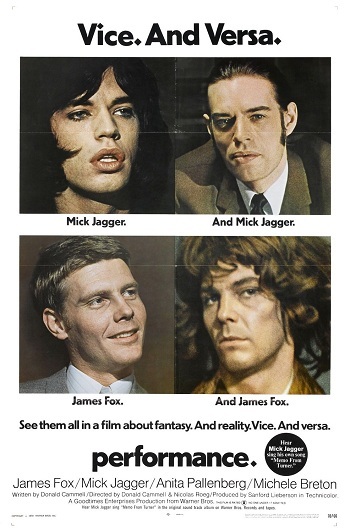 One of the most infamous Mind Screws in film history, directed by Donald Cammell and Nicolas Roeg in 1970. Also famous as the first acting role for Mick Jagger.

London Gangster Chas (James Fox) is the lead enforcer for Don Harry Flowers. When he seriously pisses Flowers off by killing an old enemy of his who Flowers would have preferred to come to a profitable arrangement with, he is left desperate for a place to hide before he can get a fake passport and leave the country. He inveigles himself into the crumbling townhouse that burned-out rock star Turner (Jagger) shares with his two girlfriends: witchy German Ferber (Anita Pallenberg) and sunny French Lucy (Michèle Breton). He gradually finds himself drawn into their life of heavy drugs and weird sex. And then things get really peculiar...

A legendary Cult Classic since its release, Performance stands out as even among the more weird films made in the period, subject to rumours and speculations even during production. The nudity and sex scenes earned it the ire of Warner Bros who had produced the film, resulting in early bowdlerized versions. The film has since been regarded and treasured as a defining portrait of London in The '60s, for its Genre-Busting Kudzu Plot. The film's score by Jack Nitzche is highly praised and the song "Memo from Turner" by Ry Cooder and Mick Jagger is well regarded enough that Martin Scorsese recycled it for Goodfellas. Alan Moore devoted an entire section of his The League of Extraordinary Gentlemen comics to making an unofficial prequel to some of the events in the film, with the Serial Numbers Filed Off of character names.