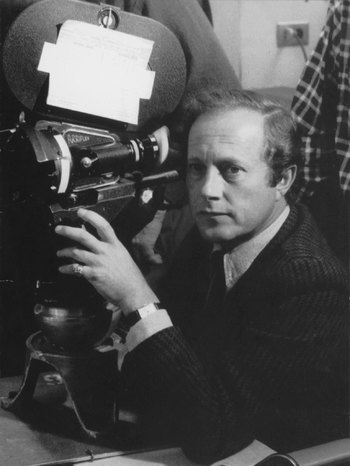 "You should make films for the future—if you do that, the audience will catch up with you, eventually."
Advertisement:

Starting in an entry-level position at a film studio, he gradually worked his way up to assistant camera operator, then camera operator (on films like The Sundowners and Lawrence of Arabia), then finally cinematographer (Fahrenheit 451, Far from the Madding Crowd, Petulia), before making his directorial debut (as co-director with Donald Cammell) with Performance.

Roeg had started working on prestige films but in the middle of the '60s, he worked on a number of British films with French New Wave inspired directors, chiefly John Schlesinger and Richard Lester, in addition to working on François Truffaut's only English-language film (Fahrenheit 451). Over the years he'd developed his own ideas about film being a unique medium, and the possibilities of using images, sounds and editing to tell stories in a new, provocative way. When it came time to apply those ideas as a director, the result was some of the most radical work ever released by mainstream studios, many of them experimental with narrative, and time, shooting sequences with flash-backs and flash-forwards intervowen together, and challenging a great many narrative and visual conventions.

As you'd expect from a former cinematogapher, Roeg's films are visually striking, but have so much going on they can be very disorienting; note how often Mind Screw gets mentioned in the pages for his films. To say his films are an acquired taste is an understatement, but once you get used to his odd style, it's easy to see his talent. His early films are frequently considered to be among the best of The '70s. His later career was much less consistent. He was a considerable influence on independent film-makers from The '70s and The '80s onwards, including Steven Soderbergh (his Out of Sight homaged the famous sex scene from Don't Look Now) as well as creators in other mediums such as Alan Moore.

He published The World is Ever Changing, a memoir as well as a collection of his thoughts on filmmaking, in 2014. Mick Jones was a huge fan and his Big Audio Dynamite hit "E=mc2" is an extended Shout-Out to Roeg's work.

Nicolas Roeg films with their own trope pages: