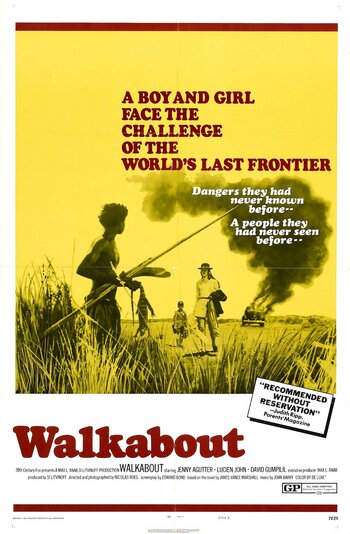 Walkabout is a 1971 British film set in Australia, directed by Nicolas Roeg and starring Jenny Agutter, Luc Roeg (Nicolas' son, who is credited here as Lucien John), and David Gulpilil. It is based off the book of the same name by Donald G. Payne.

An Australian man (John Meillon) takes his teenage daughter and much younger son (Agutter and Luc Roeg) out into the Australian outback for a picnic. He drives until his car runs out of gas. As the little boy is playing with his toys and the girl is setting up the picnic blanket, the father, who has been reading work papers, suddenly pulls out a pistol and starts shooting at his kids. After the daughter takes the little boy and hides behind some rocks, the father sets the car on fire and then kills himself.

The girl leads her little brother on a hike through the desert. In short order they are in desperate straits, with the girl forced to carry her little brother while both suffer from dehydration. They find a small watering hole and drink, but the next morning the water has dried up. Unable to think of anything else, the girl elects to wait at the watering hole. They appear to be doomed to die of thirst until they are met by a teenage Aborigine boy (Gulpilil) on a walkabout. The boy saves their lives, drawing water from under the ground with a reed, and then takes them along with him for his walkabout through the outback.

The movie gets even weirder from there. Has a place on the Roger Ebert Great Movies List.