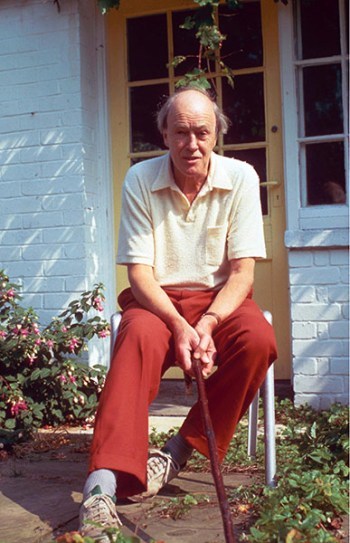 Roald Dahl (September 13, 1916 - November 23, 1990) was a British author of Norwegian descent most famous for his distinctively dark but often whimsical children's novels and poetry collections, though he started out as a writer of short stories for adults.

His style is exemplified by Black Comedy, and as a result even his juvenile stories contain a good deal of more-than-usually sophisticated Nightmare Fuel. The fact that said young target audience has been happily lapping all this up for decades now seems to imply that many kids actually like to be terrified (hey, it works for Doctor Who).

His works for adults are almost universally cynical and pessimistic about human nature; his works for children take the same attitude to a whole other level, featuring arrogant, wicked and/or just plain mean adults who menace innocent youngsters (or, in a couple of memorable cases, fuzzy little animals) more or less just because they can. Sometimes these are traditional boogeymen (e.g., The Grand High Witch in The Witches, the Giants in The BFG), but more often they're simply irredeemably vile grownups. Just how irredeemable is spelled out in exquisite detail on almost every page.

It would be a case of Beauty Equals Goodness, except that most of his small heroes and heroines are themselves deliberately pretty average. They're also in large part Aesop-proof by virtue of their already-innate goodness, intelligence, and/or resourcefulness. They generally succeed in foiling the bad guys simply by first recognizing and then rising above the relentless nastiness and/or or stupidity around them. If you're starting to suspect that there were very few grey areas in Dahl's POV, you're right.

Dahl himself grew up to have quite the exciting life. After graduation he went to fulfill his military service in Africa, where he became an Ace Pilot for the Royal Air Force during World War II. C. S. Forester (author of the Horatio Hornblower series) asked Dahl to write down his account of his survival after a desert crash, with the understanding that Forester would edit it into a proper magazine article. Dahl did as asked — and Forester refused to change a word. In fact, he encouraged Dahl to publish it under his own name. Thus began Dahl's career as a writer. Dahl was later assigned to cover the British ground forces in Greece, where his squadron fought valiantly against long odds and he was shot down. The second crash injured his back and left him with recurring headaches that eliminated him from flight duty.

Although Dahl's flying career was ended by the crash, his military service was not. He found himself assigned as Assistant Air Attache to the British Embassy in Washington, D.C.. While there, his natural charm and ability with words and conversation got him a second, unofficial position with the British Security Co-Ordination, an office officially meant to coordinate security i.e. counterespionage with the United States, but actually a quasi-espionage organization in itself, giving the British Government an inside view of American political activity, tracking down and discrediting pro-Nazi individuals, groups, and businesses, and working to make sure the United States maintained its commitment to assisting the British in their war effort. Dahl's part in this was to hobnob with the president and his wife, a young congressman named Lyndon Johnson, and other notables, sometimes with his penis. Yes, he was also very popular with the ladies, almost to the point of a real-life James Bond (and coincidentally, another intelligence officer he worked with on occasion was none other than Ian Fleming).

While in Hollywood during the war Dahl had also met Walt Disney and pitched him a story called The Gremlins, about creatures who sabotage army airplanes. Disney was interested in making it into a cartoon, but after a lot of preparation the idea was eventually cancelled, much to Dahl's chagrin. It was however eventually published as his first novel. Another of Dahl's WWII-themed stories, "Beware of the Dog", was adapted into the film 36 Hours (1965).

In the 1950s Dahl finally earned lasting fame as a writer of suspenseful Black Comedy magazine short stories for adults, later collected into the book and TV series Tales of the Unexpected, earning him the title of "Master of the Macabre" on both sides of the Atlantic. His short stories were also adapted to episodes of Alfred Hitchcock Presents. In his increasingly rare spare time, he wrote the screenplays for the James Bond film You Only Live Twice and Chitty Chitty Bang Bang, both adaptations of books by his good friend Ian Fleming.

Dahl's eventual emergence as a full-time children's writer began in the early 1960s, after James and the Giant Peach and Charlie and the Chocolate Factory became a huge success. Other popular titles followed in quick succession, accelerating into the 1980s, when Dahl was well into his sixties/seventies: The BFG, The Witches, Matilda. Dahl initially hired a different illustrator for each book that he wrote, until that task was secured for the remainder of his career in 1978 by master of loopy sketchiness, Quentin Blake, who would also provide his own illustrations for all of Dahl's books that were not initially illustrated by him, finishing with The Minpins in 2017. Almost all of his juvenile books have been made into movies — the iconic Charlie and the Chocolate Factory more than once — though he so disliked Willy Wonka & the Chocolate Factory that it was nearly 15 years before he allowed another of his books to be adapted (and he didn't like The Witches (1990) much either). Curiously, no two of these movies were made by the same person. Particularly in the U.K., stage adaptations of his work are numerous as well; in The New '10s, Matilda and Charlie and the Chocolate Factory have both become successful West End musicals.

Dahl's personal life was far less lucky, and considerably more complex. He was married for many years to Oscar-winning American actress Patricia Neal. They had five children; Olivia, the oldest, died of measles at age 7. Dahl was an utterly shameless womaniser, but when Neal suffered burst cerebral aneurysms and told that she would never walk or talk again Dahl wouldn't hear of it, and personally took control of her rehabilitation. Over the next few years he, for want of a better word, bullied her back to health.

Most controversially (and the obvious reason why he never received a knighthood or other official UK honours, other than an OBE which he turned down as he wanted his wife to be Lady Dahl) were accusations of antisemitism, particularly because of statements like "Something in the Jewish character provokes animosity. Even a stinker like Hitler didn't pick on them for no reason." That being said, Dahl himself maintained that he was not antisemitic, but anti-Zionist and acknowledged in Going Solo that Hitler's persecution of the Jews was terrible and that the Holocaust was a horrific genocide. He maintained friendships with a number of Jews, including philosopher Sir Isaiah Berlin. Amelia Foster, director of the Roald Dahl Museum in Great Missenden, states, "He was very angry at the Israelis. He had a childish reaction to what was going on in Israel. Dahl wanted to provoke, as he always provoked at dinner. His publisher was a Jew, his agent was a Jew, and thought nothing but good things from them. He asked me to be its managing director, and I'm Jewish." Isaiah Berlin himself said, "I thought he might say anything. Could have been pro-Arab or pro-Jew. There was no consistent line. He was a man who followed whims, which meant he would blow up in one direction, so to speak."

Roald Dahl's works (with pages on this wiki):

Roald Dahl and his works provide examples of these tropes: