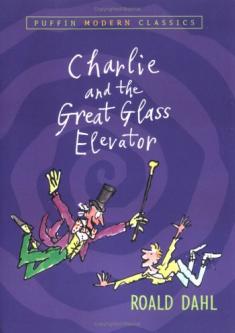 The 1972 sequel to Charlie and the Chocolate Factory by Roald Dahl, beginning directly where the previous book left off. Charlie, having just inherited ownership of Willy Wonka's factory, crashed through the roof of his home to pick up his family in Mr. Wonka's huge glass elevator (it can go in any direction, not just up and down). Having spent the past 20 years in bed, Charlie's grandparents (except for Grandpa Joe, who was already out) refused to get out of bed, so Mr. Wonka, Charlie, and Joe just pushed the bed into the Elevator.

Now, Wonka flies the Elevator really high, with the intention that they will then shoot straight down through the roof of the chocolate factory. However, panicky Grandma Josephine accidentally causes them to fly into space, where they end up in orbit around the Earth. What happens up there is just the first half of this novel, because Grandma Josephine and her fellow bedmates manage to get themselves in even more trouble once everyone's back at the factory and Mr. Wonka reveals that he's created a Fountain of Youth pill...

You'll probably be unsurprised to hear that this book was/is a lot less popular than the original Charlie and the Chocolate Factory, though it remains in print to this day. It has never had a film adaptation, since Dahl hated Willy Wonka & the Chocolate Factory enough to refuse all rights to make this book into a film. Most adaptations of Chocolate Factory, including the 2005 Tim Burton film adaptation and the 2013 stage musical, have complete closure, negating the circumstances of this book (and thus serving as Alternate Continuity). However, Richard George adapted it into a play, and there have been at least five different audiobook versions. On November 27, 2018, it was revealed that Netflix, as part of a deal that allowed them to make adaptations for other Roald Dahl books, will be allowed to make an adaptation of the book.

Dahl was working on a third book, Charlie in the White House, but when he died, only one chapter was complete, hence the lack of real closure at the end of this one.

This novel provides examples of (see also the character sheet for both books):

"You'll never get anywhere if you go about what-iffing like that."