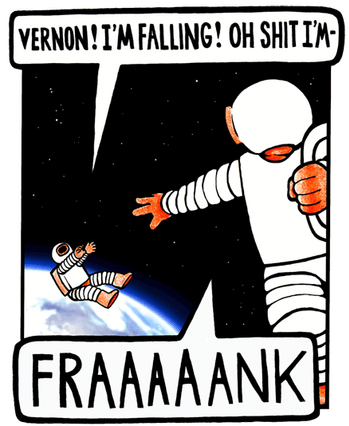 Ko-Dan Officer: Stardrive out. Thrusters out. We're caught in the moon's gravitational pull. What do we do?
Lord Kril: [matter-of-factly] We die.
— The Last Starfighter
Advertisement:

When it is mentioned at all, the force of gravity is often portrayed as a sort of cosmic quicksand, an intractable mire that can yank spacecraft out of the sky without any consideration of orbital momentum. Frequently accompanied by exclamations like, "We're caught in the planet's gravitational field!" or "We're being sucked in!"

Obviously not Truth in Television. Gravity is what allows stable orbits to exist — without gravity, Earth would just fly away from the Sun (disregarding for a minute that without gravity, both would never have formed in the first place). Even increasing gravity, until a certain point, would not cause an orbiting body to fall onto the planet, but would simply shift it to a different orbit.

Black Holes are particular offenders of this nature, because everyone knows that their gravitational pull is so powerful even light cannot escape and the subatomic particles that constitute you will be ripped apart. Scientists even called this effect "spaghettification". In reality, this only applies past the event horizon of the black hole, not the orbiting accretion disk around it. From a distance, the gravity of a black hole is no different than that of any other massive body like a star, and it's even theoretically possible to have planets orbiting them. See also Analysis for cases on when this trope does not apply and when it does.

A subtrope of Artistic License – Space and the cousin of Space Friction. See also Gravity Master, when a character has the power to control it. Not to Be Confused with Gravity Falls.