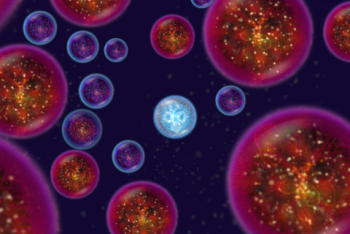 Prepare to be assimilated.
Advertisement:

Osmos is a PC/Mac/iOS/Android game released in 2009, a debut project of the Canadian developer Hemisphere Games

. The gameplay is a Rising Up The Food Chain Game, with the player controlling a primordial cell amongst a group of similar beings, which will absorb everything smaller than them and be absorbed by larger motes in return. The player is not immune to being absorbed, but whereas the rest of the cells drift aimlessly, the player cell is allowed to propel itself through ejecting pieces of itself, though this makes the cell itself smaller. The goal is usually to absorb the largest or the most unique cell on the given level.