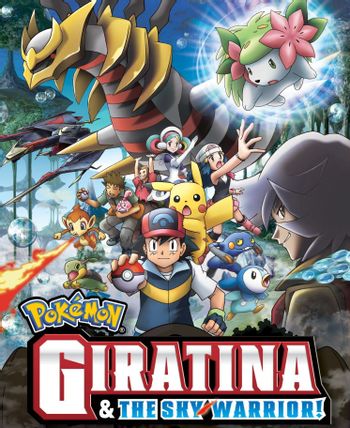 Distorting worlds are no match for the Sky Warrior.note And Regigigas.
Advertisement:

Pokémon: Giratina and the Sky Warrior is the English title for the eleventh theatrical movie spin-off of Pokémon: The Series. The movie's basic premise centers around the existence of a "Reverse World," a kind of alternate universe designed to correct imbalances in the "Real World." Five years before the events of this movie, a research scientist named Newton Graceland apparently discovered the Reverse World and its sole resident Pokémon, Giratina, a winged, six-legged, metallic dinosaur-like creature. Newton and his assistant Zero plot to harness Giratina's power and take over the reverse world.

Series regulars Ash, Dawn, and Brock, along with their regular Pokémon companions, get roped into all this through the intervention of a cute, grassy little Pokémon called a Shaymin, who's on its way to the "flower garden" for the "flower-bearing" ritual with other Shaymin. Shaymin can communicate telepathically so we can hear its articulated thoughts, making it one of the very few Pokémon who can actually "talk". Shaymin's connection to Giratina and the Reverse World has something to do with its ability to render toxic material harmless via some internal process. Giratina seems to need Shaymin's help. In the end, Newton, who enlists Ash and his friends to help him, finally figures out what Giratina wants.