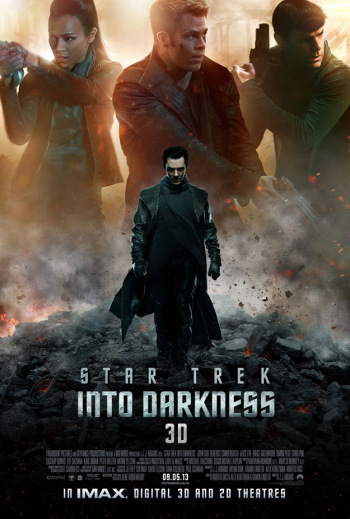 "Now... shall we begin?"
"You think your world is safe? It is an illusion, a comforting lie told to protect you. Enjoy these final moments of peace, for I have returned to have my vengeance."
— John Harrison
Advertisement:

The One With… Benedict Cumberbatch.

Star Trek Into Darkness is the twelfth film in the Star Trek film series, released in 2013.

The sequel to Star Trek (2009), it is the second film in the franchise to be directed by J. J. Abrams. Along with returning actors from the previous movie such as Chris Pine as Captain Kirk and Zachary Quinto as Mr. Spock, the film features an All-Star Cast by bringing Benedict Cumberbatch, Alice Eve and Peter Weller on board. Noel Clarke also makes a brief appearance.

Tensions are high upon the USS Enterprise as Captain James T. Kirk and his first officer Mr. Spock clash over their conflicting philosophies regarding professional and personal honor after a mission in which Kirk violates the Prime Directive. But when a rogue Starfleet agent, John Harrison, embarks on a campaign of terror against the organization, the crew of the Enterprise is assigned the duty of traveling to the volatile Klingon homeworld and bringing him to justice. Of course, all is not as it seems: there might just be a Greater-Scope Villain lurking behind the rogue officer, and Harrison may be more than he claims to be...

and the full trailer here

. Followed by the 2016 sequel Star Trek Beyond.

Sadly, the film ended up being both the last time Leonard Nimoy would play Spock Prime and his final film appearance in general before his death on February 27th 2015.

open/close all folders
Tropes # to C
Tropes D to L
Advertisement:
Tropes M to R
Tropes S to Z
I believe in you, Jim...
Feedback