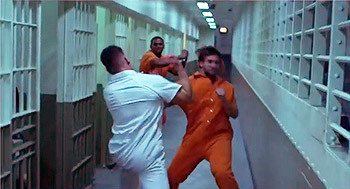 Fights can take place in many strange locations such as a bar, a diner, or even on top of a train. Each location creates its own atmosphere and limitations which dictate the movements of the fighters.
Advertisement:

A Hallway Fight, as the name implies, takes place in a corridor. The fighters are more or less forced to go in one direction while the narrow and cramped quarters force them into a more claustrophobic battle. Because of these restraints, the fights can be very close and quite brutal. If the director so chooses, it can also be the perfect opportunity for The Oner. It can also be a way to Hand Wave the Mook Chivalry trope as multiple opponents often have to come one-by-one.