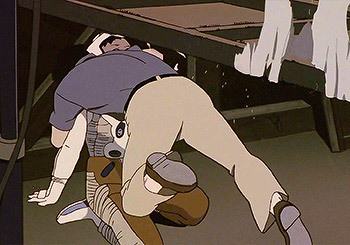 A grenade, bomb or other type of explosive is live with mere seconds to go, leaving Alice in danger. Or perhaps the building is burning, and a rafter comes loose. Or a window or glass ceiling shatters, and Alice is right in the path of the deadly shards.

Just in time, Bob leaps between her and the danger. He might get on top of her to shield her from falling debris, or he might simply cradle her with his body blocking the danger. Often a Heroic Sacrifice, but it's just as often that Bob has Nigh-Invulnerability, or maybe the damage is made less by his actions.