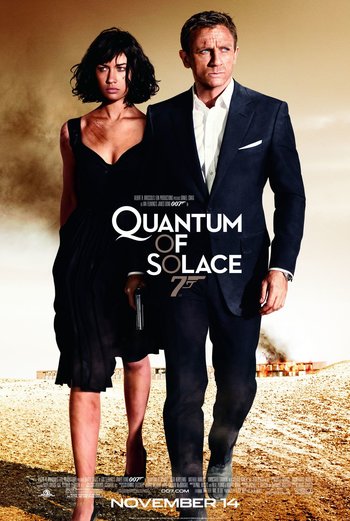 Another tricky little gun giving solace to the one that'll never see the sun shine...
"How much do you know about Bond, Camille? Because he's rather a tragic case... His MI6 file says he's difficult to control - a nice way of saying that everything he touches seems to wither and die."
— Dominic Greene
Advertisement:

The one where the bad guys try to steal a country's water.

Quantum of Solace is the twenty-second James Bond film by Eon Productions, the second to star Daniel Craig. It was directed by Marc Forster and released on October 31, 2008. Jack White and Alicia Keys performed the Title Theme Tune, "Another Way to Die". At one hour and forty-six minutes, it is also the shortest-ever Bond film (beating Dr. No and Goldfinger, which were both one hour and fifty-one minutes).

The story follows on from Casino Royale, making it one of the few Sequel Episodes in the Bond movie franchise. Following the death of Vesper Lynd, Bond is out for revenge against those responsible: an Illuminati-esque crime syndicate known as "Quantum". His rampage eventually leads him to Dominic Greene, a Quantum operative out to overthrow the Bolivian government through a corrupt general named Medrano, and the mysterious Camille, a woman who has unfinished business of her own with the general.

The film's title comes from a 1960 short story by Ian Fleming contained in the anthology book For Your Eyes Only, and means "a small degree of comfort".

Coinciding with the film's release was the video game adaptation, 007: Quantum of Solace, notable for A) being the first Bond game published by Activision, and B) adapting both this film and Casino Royale.

Followed by Skyfall, which went standalone instead of having close ties to this film.

Quantum of Solace contains examples of:

Slate was a dead end.

Damn it, he killed him!

Slate was a dead end.

Damn it, he killed him!