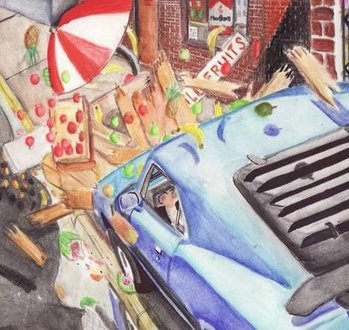 Used with permission.
Gordon: Mount the curb!
Bill Corbett: We're gonna hit a fruit stand if it's the last thing we do!
— RiffTrax on The Dark Knight

From Roger Ebert's dictionary of movie clichés, fast chase scenes require a fruitcart being plowed into, preferably by a Drives Like Crazy Red Shirt in hot pursuit. Almost always pops up in "ethnic" neighborhoods (e.g. Chinatown, Little Italy, etc.). If a chase scene takes place in one, you're supposed to chant "Fruit Cart! Fruit Cart! Fruit Cart!" repeatedly until its inevitable destruction in a spray of melon rind.

Occasionally the fruit cart is replaced by a newspaper stand, a pile of garbage, or a row of garbage cans, but the fruit stand is still a favorite, mostly because the crash will create a very colorful explosion.

In real life, driving through a fruit stand would leave the car in no condition to continue the chase.

In a related trope, action movies with a gunfight in an outdoor market will inevitably result in the shooting of one or more exploding melons.

The Sheet of Glass is often used in the same manner.