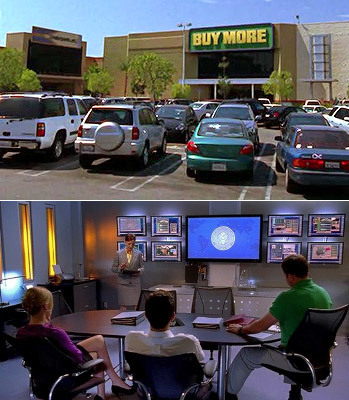 Outside: Unassuming electronics store.
Inside: Joint CIA / NSA base.
Det. Mishka: You're not FBI. Who are you?
Darien Fawkes: BWM.
Det. Mishka: Which stands for...
Bobby Hobbes: Bureau of Weights and Measures.
— The Invisible Man
Advertisement:

One problem with being a member of the Government Agency of Fiction or of a Covert Group is that, at some point, you need to interact with the public or non-covert governmental agencies. This is where being a covert group with a mundane front comes in. A covert group has a highly mundane front and it will sometimes be commented that their funding is hidden from the public within the low funding the front group officially receives. Sometimes this will be played for laughs, as characters will either make fun of the official organ the spies are supposed to come from, or else see the front for the Paper-Thin Disguise that it is. As a general note, it is very common for a cultural attaché to be one of these ("travel to interesting places; kill interesting people").

Compare with the low rank/high power of the Almighty Janitor, as well as the Legitimate Businessmen's Social Club, which is when something similar is done by gangsters (and not very well, at that). See also Milkman Conspiracy and Overt Operative. When surrounded by even more secrecy, it becomes a case of No Such Agency. While not required, the Mundane Front may have an Unusually Uninteresting Name, or one with Ominous Mundanity.