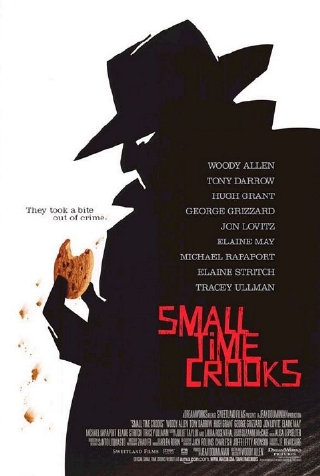 One of Woody Allen's zanier latter-day films, the 2000 comedy Small Time Crooks follows a former criminal named Ray (Allen) and his wife, Frenchy (Tracey Ullman), poor but happy in their New York City apartment. Ray hatches an elaborate scheme: Rob a bank by buying the building next door and tunneling under it. To explain their presence, Ray has Frenchy set up a cookie shop as a front. Two days later, the tunneling is getting nowhere, but the cookie shop is a huge success!

While the plot shares some similarities with S. J. Perelman's play The Night Before Christmas (itself adapted to the screen as the 1942 comedy Larceny, Inc. with Edward G. Robinson), in true Woody Allen style this film is less about the heist itself and more about how Ray and Frenchy's relationship progresses in the face of their newfound wealth and status.