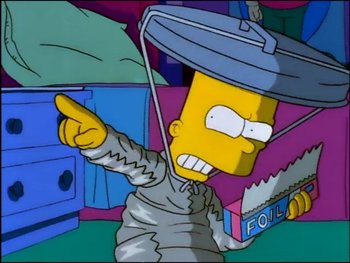 When Springfield's Volunteer Fire Fighters put on a demonstration of fire prevention and safety at Springfield Elementary, Bart is his usual mischievous self, culminating in using the hose to fill the school gym with water until the doors burst and he rides out on a basketball backboard. Principal Skinner tells Homer and Marge that Bart has Attention Deficit Disorder, and unless they agree to put him on an experimental, untested new drug called Focusyn intended to treat ADD, he'll be expelled. Marge is dubious, but a visit to the company that produces Focusyn persuades her to give it a shot. She, in turn, persuades Bart to start taking the drug.

To the amazement of all, including Bart himself, the drug appears to work, and he becomes focused, productive, and well-behaved, and begins tutoring a Navajo boy in his spare time; however, Lisa notes that he also seems to have lost his sense of fun. Homer and Marge decide to celebrate Bart's turnaround by going to see Showgirls, but when they return, Lisa tells them Bart's behaviour has taken a turn for the bizarre. They find him in his bedroom in the grip of intense paranoia, having hung coat hangers from his ceiling, wrapped himself in tin foil, and tied a metal trash can lid to his head; he tells them that Major League Baseball are spying on everyone in Springfield and collecting their personal information.

Homer and Marge take Bart back to the lab for observation, and are told that a change in his medication might alleviate his paranoia. An alarmed Bart refuses, downs a large dose of Focusyn, and flees the drug lab. He proceeds to sneak onto the Fort Fragg military base and steal a tank, which he drives to the playground of Springfield Elementary before his family catch up with him. But before he agrees to Marge's plea to get out of the tank, he fires a single round into the sky... and a satellite with the MLB logo falls to Earth, confirming Bart's accusations. Before the townsfolk can process this revelation, then-single-season home run record holder Mark McGwire shows up and distracts them with a home run demonstration while he hides the printout of their personal details. Their adventures over, Homer and Marge decide to take Bart off Focusyn and put him on Ritalin instead.

Oh, why'd you have to shush, you ruined the whole show.
Feedback