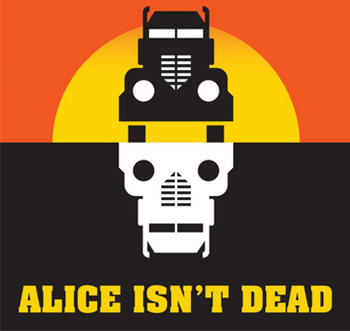 I love you, Alice. I don't forgive you. But I love you.
We are nothing if not absurd. We are nothing.
—the Narrator
Advertisement:

and written by Joseph Fink. It details the life of a long haul trucker looking for her wife, the titular Alice. Along the way she runs across a disturbing individual who seems to be stalking her for some purpose or another, as well as several other run-ins with the paranormal. Despite all this, she remains determined to find Alice and get an explanation for why she vanished, come hell or high water.

Like its predecessor, Welcome to Night Vale, Alice Isn't Dead balances humor and horror, though it aims to differentiate itself with a darker tone and a pre-determined end date. It aired every other week on Tuesdays, and can be found on iTunes

, and the Night Vale Presents

A novel adaptation of the podcast was released on October 30th, 2018, written by Josheph Fink, and an audiobook was released voiced by Jasika Nicole.

Not to be confused with Alice Is Dead.

The Podcast contains examples of: