Can Only Move the Eyes 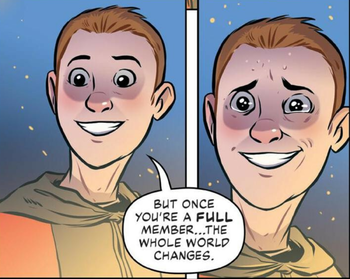 "It was like some different person, some scared person, was looking out of those same eyes."
"Now you are stone... Yet I leave your eyes. I shed no tears for this land... But I cannot deny you yours!"
— Malcolm, The Legend of Kyrandia
Advertisement:

A Sub-Trope of People Puppets and Taken for Granite.

Even though Puppeteer Parasites frequently claim they have "total control" of someone's body, it's frequently the case that the possessed person retains some degree of control. This ranges from barely perceivable tiny twitches to outright rebellion through sheer willpower. Similarly, someone who is frozen in place somehow retains some small degree of movement.

However, the most common variations are to retain control either of the head or of just the eyes. The eyes are often used to demonstrate that the person is still conscious and aware, but only able to helplessly witness what their body is forced to do. Typically this will involve a totally impassive face... except for the eyes, wide and silently screaming in horror at the situation. These usually result in a case of And I Must Scream.

On the other hand, if the person still has control of their whole head, the situation is frequently played for comedy, most often the juxtaposition of the actions the body is taking with the warnings and apologies from the head that is just along for the ride. When not played for humor, the victim will sometimes plead to be killed to protect people from them and to end their suffering.

Also an example of Truth in Television. Locked-In Syndrome

is a condition brought on by hemorrhaging and/or trauma in the brainstem, essentially severing connections between the brain and the muscles of the body, but not the incoming neurofibers. This results in a paralysis where no part of the body is capable of movement, yet it can still feel sensations such as pain or warmth. In a few lucky cases, the muscles of the eyes are still connected to the brain, allowing movement. Locked-In Syndrome is often a case of Nightmare Fuel for those who think about it. A (usually) fully-functional mind, trapped in an immovable body, entirely unable to communicate its plight to anyone around them. It's the closest a human being can get to being Buried Alive. Aside from, you know, actually being buried alive.