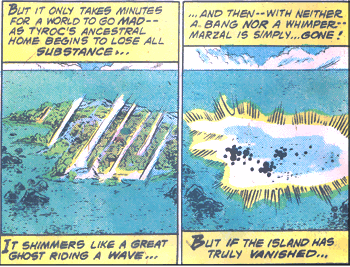 A plot that features a location that only appears or is accessible for certain periods of time. Frequently the home to a Lost World or civilization, it is usually found accidentally by "outsider" characters. Common features of the subsequent plot include one of the outsiders falling in love with a native, and/or the outsiders being required to leave within a certain period of time, or be trapped there.

Many examples are in reference to the 1947 musical Brigadoon, about two American tourists who stumble upon the mysterious town of the same name.

Compare The Little Shop That Wasn't There Yesterday. Not to be confused with Hidden Elf Village, although the inhabitants of the Hidden Elf Village usually turn their town into a Vanishing Village if they have the phlebotinum to pull it off. Subtrope of Revealing Continuity Lapse.

Sometimes a Lost World or The Shangri-La, explaining why it remains hidden despite the best efforts of Google Earth; it wasn't actually there when they took that particular satellite picture.