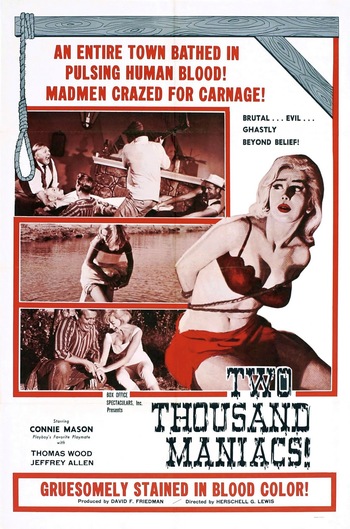 Two Thousand Maniacs! (1964) is a low budget splatter horror film written and directed by Herschell Gordon Lewis. It is the second part of the informal "Blood Trilogy", following Blood Feast and followed by Color Me Blood Red. It is known for its scenes of full-color gore and torture, which together with its B-Movie quality direction and acting earned the film a cult following.

Six Yankee tourists are lured into the quaint southern town of Pleasant Valley, invited to be the guests of honor in a centennial celebration of the day Union troops destroyed the town. They soon discover, however, that the festivities are nothing like they expected, as they are forced to take part in a series of extremely violent and gory games.

Two Thousand Maniacs! was remade in 2005 as 2001 Maniacs, starring Robert Englund and Lin Shaye, with Peter Stormare appearing in a minor role. A direct-to-video sequel, entitled 2001 Maniacs: Field of Screams (which replaces Robert Englund with Bill Moseley), was released in 2010. It had the town going on a road trip due to the fact that there weren't enough fresh Yankees coming into town for them to kill, and coincidentally running into the cast of a reality show centered around wealthy socialites Rome and Tina Sheraton.

The name of the alternative rock band 10,000 Maniacs is a Shout-Out to this film, as is the title of John Waters' film Multiple Maniacs.

This film and its remake contain examples of: