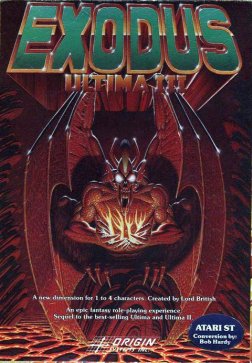 "I challenge you to name one other game where you can play a Transsexual Ewok Jester."
Spoony: Ultima Retrospective
Advertisement:

Ultima III is the first Ultima that was published by Origin Systems. First released in 1983, finally quests and dungeons started fitting together better and with more explanation. The game style would later inspire games such as Final Fantasy and Dragon Quest.

The Stranger killed the Big Bads of the previous two games, Mondain and Minax; but the waves and waves of monsters keep coming. They're organized; they're taking orders from someone or some thing; but nobody knows what. A "remnant" left over from the times of Mondain and Minax has survived. The game mentions they had an "unholy union". Did they have a child? Did they have some kind of demon servant that was overlooked? Was something left from all of that Schizo Tech from mucking around with Time Travel? Yes.

In the midst of this, an Isle of Fire has arisen in the ocean. Some people have claimed that there is a castle in the middle, but the only way into the island is blocked by the Immortal Earth Serpent that can not be moved.

This Evil has a name. One of the ships that got too close to the Isle of Fire was found drifting offshore with its crew missing and a word written in blood on the deck. Exodus.