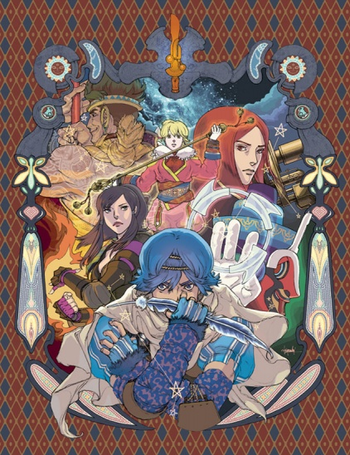 The heroes of Eternal Wings and the Lost Ocean (counter-clockwise from the bottom: Kalas, Mizuti, Lyude, Xelha, Gibari and Savyna)
Cast light upon the darkened earth,
Save those lost in despair,
O Mighty Ocean,
Guide as we journey through
The darkest pit of night
Advertisement:

Baten Kaitos: Eternal Wings and the Lost Ocean is a memorably named JRPG and part-Card Battle Game for the Nintendo GameCube, developed by Monolith Soft and published by Namco.

The world of Baten Kaitos takes place on a series of magical Floating Continents, high above an endless expanse of poisonous gas. The humans who live here have evolved "Wings Of The Heart", and use a form of magic called "Magnus" to capture, store and reproduce the essence of any item imaginable.

Kalas, a young Anti-Hero with an artificial Wing of Heart to replace his missing one, is searching for the murderer of his grandfather and brother with the help of his "Guardian Spirit" (essentially a fourth-wall stand-in for the player). He stumbles onto a Mysterious Waif called Xelha who is on her own quest: to stop The Empire and its Emperor Geldoblame from capturing the five End Magnus that contain the essence of a long-dead evil god and using their power to Take Over the World.

As they journey across the islands, they gather an eclectic party of allies: a buff fisherman named Gibari; an idealistic Empire ambassador and Defector from Decadence named Lyude; a cold-hearted mercenary named Savyna; and the bizarre but powerful "Great" Mizuti.

So what makes the game interesting? Well, for starters, there's the visual appeal. The graphics remain not only among the best on the Gamecube, but thanks to its Yasuyuki Honne, handpainted backgrounds, one of the best looking games period, but it's more than that: the game has a visual style that is very interesting. Unlike most media that have used the "floating continent" schtick, the world of Baten Kaitos is more than just a few chunks of otherwise-normal firmament suspended in the air. The architecture and costumes of the world offer unique "local flavor" without clear parallels in other worlds — the land of Diadem, for example, has buildings made out of dark purple clouds. Furthermore, the characters have interesting designs, enhanced by their "Wings of the Heart," which appear during battle and some cutscenes. The wings change the way the characters move and fight, allowing for unique and flashy special attacks.

The gameplay is also worth noting. In the world of Baten Kaitos, cards called "Magnus" are all-important, as they can be used to store the "essences" of objects, or even intangible things like memories and exhaustion. This allows for a Hyperspace Arsenal and interesting puzzles like storing or combining key items. Items even "age" over real time: food items (which provide HP recovery) rot and lose their effectiveness, seeds grow into plants and gain effectiveness, and rare items (like coins) appreciate in value.

The battle system also uses Magnus, as each party member builds a deck of attack, defense and support items that can be played in turn. Each card has a set of numbers attached to it, and like poker, playing matching numbers or even straights can increase the potency of the effects tremendously. Coordinating your elemental affinities is also critical to success, as opposing elements simply cancel each other out: for example, 50 points of Fire damage and 50 points of Water damage in the same "action" cancel each other and result in a net attack of 0 damage points.

It proved popular enough to gain a prequel called Baten Kaitos: Origins (or Baten Kaitos II in Japan). Set twenty years before the events of Baten Kaitos, it tells the story of a Power Trio that find themselves on the run when a faction within the Empire attempt to rid the world of the "Wings Of The Heart" in favor of soul-eating mechanization. They are: Sagi, a elite soldier of the Empire who finds himself framed for the murder of the Emperor; Guillo, a sexless humanoid weapon animated by magic who (unusually) has a degree of sentience; and Milly, an enigmatic and spunky noblewoman. Under the command of the Empire's chief spymaster, they must work together to unravel the various conspiracies that plague the bureaucracy of the Empire and clear Sagi's name.

The game is far superior to the first in almost every respect: navigation through the world is quicker and easier, the battle system has been greatly streamlined (notably removing most of the Fake Difficulty) while retaining its strategic elements, the voice acting is vastly improved and the story expands upon the original exponentially. With all these improvements, the punishing difficulty and the fact that it retconned away quite a few of the plot points from the first game can probably be forgiven. Sadly, the game was released during the death throes of the Gamecube (it actually holds the dubious honor of being the final original game released for the system outside of Japan), so it received almost no press or consumer attention either in Japan or the West, and was unreleased in PAL territories.

Over the years, both the games have gotten some recognition as excellent RPGs for a system that didn't have too many. And the soundtracks of both games are often collectively considered Motoi Sakuraba's finest work.

Now with a character sheet!

A third installment for the Nintendo DS appeared on a list of games in production, but it never got past the early stages of production and was later officially canceled. Since then, there has been very little news of a new Baten Kiatos game, only unsubstantiated rumors, although fans have not lost hope for another installment.

Baten Kaitos has representation in Super Smash Bros. for Wii U, in the form of a remix of Origins' battle theme "The valedictory elegy"

, which plays on Gaur Plain and Boxing Ring.