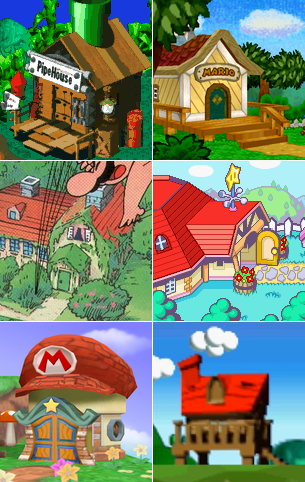 A TV show usually has a number of recurring locations: the protagonist's house, his workplace, the Local Hangout, you name it. Soon enough, the appearance of these locations becomes very familiar to the viewer... until this trope happens.

This is sort of a The Other Darrin, but for sets: a location, which is said to be the same we know is now represented by a different set. It goes beyond a simple redecoration: the interior is completely different, as if someone destroyed a building from the inside and rebuilt it with a different layout in mind. And for more cognitive dissonance, there is no explanation for the change, the outside shot remains the same and the characters act like they don't even notice it.

This often happens between an unaired pilot and the actual pilot (no examples for this case, please), between the pilot and the second episode, and between a season finale and the next season premiere.

This trope can also be seen in Video Games when a location that is available in multiple games in one series changes considerably between two games without any in-story justification. This is one of the Acceptable Breaks from Reality as no-one wants to explore the same actual area game after game (unless the gameplay is focused away from level layout). A clever game designer make things look different by changing the various Insurmountable Waist Height Fences and Invisible Walls, but often it's as if someone just tore down buildings and geography and rebuilt them from scratch, in different locations. If a Justified Trope, it's because something changed (or blew up) the world on a fundamental level.

Roguelike games usually feature Chaos Architecture as part of the genre, in the form of randomly generated dungeons.

See also Bag of Spilling, Expansion Pack World. Do not confuse with Bizarrchitecture or Alien Geometries (though the latter may be used as an in-universe justification). Not related to The Maze.