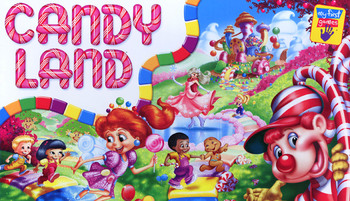 Candy Land is a children's board game originally published in 1949. It traditionally consists of a long and twisty road of six colors and a 64-card deck. Players move by drawing the top card from the deck to reveal a color, moving their piece to the nearest space with that color. There are also cards that take the player to sections of the land, sending them forward or backward several spaces. The first player who reaches "Home Sweet Home" (later replaced with King Kandy's castle) wins.

Many consider the product to be the best example of a children's game. It requires no skill except basic motor control, children are enthralled by the colorful world, and anyone over the age of 10 will play only in order to spend time with someone under the age of 10. As such, it's a classic.

A movie version is in development, but it's stuck in Development Hell for now.

There was an Animated Adaptation, Candy Land: The Great Lollipop Adventure, that is considerably more criticized for being too sweet. There's also a baking show adaptation hosted by Kristin Chenoweth and aired on Food Network in 2020.

This board game appears in the following shows: