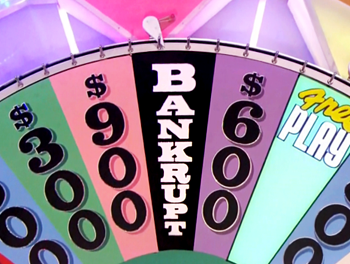 Any good game show features its fair share of hazards; they're what make the show interesting and effective, like a round of golf. Any hazard done well can be worked around. This one, though...

A Whammy is a Game Show's sadistic streak personified in a condition that takes from the unlucky player who gets it, usually everything. A player who gets a Whammy can pretty much throw in the towel right then and there, unless of course his opponents (if there are any opponents) also hit them.

If the Zonk is the prankster that tapes a "Kick Me" sign to your back, and the Undesirable Prize is the annoying roommate who thinks putting Saran Wrap on the toilet is the surest way to express his friendship, then the Whammy is the guy who mugs you with an AK-47. There's no reasoning with the Whammy: he only takes, and just how much he takes is purely up to the show's producers.

Mostly a Dead Horse Trope. The opposite of the Whammy is the Bonus Space. Getting a Whammy during a Golden Snitch situation generally amounts to an instant win for your opponent. Compare Critical Failure.

Not related to a Wham Episode, a Wham Line, or Whammy Bid, though either may induce the same kind of feelings. For the 2002 revival of the Trope Namer known as Whammy!, see Whammy! The All-New Press Your Luck.

The contestant's winnings are moonwalked away in this classic "Press Your Luck" whammy styled after Michael Jackson.

The contestant's winnings are moonwalked away in this classic "Press Your Luck" whammy styled after Michael Jackson.