Series / Where in the World is Carmen Sandiego? 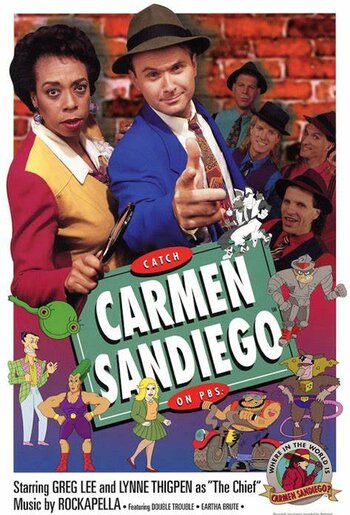 "All these people want to know..."
"Well, she sneaks around the world from Kiev to Carolina
She's a sticky-fingered filcher from Berlin down to Belize
She'll take you for a ride on a slow boat to China
Tell me, where in the world is Carmen Sandiego?"
— Theme song, by Rockapella
Advertisement:

Where in the World Is Carmen Sandiego? is an Educational Game Show based on the Carmen Sandiego computer games by Brøderbund, which ran for five seasons (295 episodes; 65 episodes each in Seasons 1-3 and 50 episodes each in Seasons 4-5) on PBS from September 30, 1991 to December 22, 1995 (with reruns airing until May 31, 1996). The series was a co-production between WGBH Boston and WQED Pittsburgh. Three children answered multiple-choice geography questions while pursuing a member of Carmen's gang, who had stolen a famous landmark.

Instead of playing for cash, the young "detectives" played for points, here called "Acme Crime Bucks". Halfway through the show, the lowest scorer was eliminated. The two remaining children played a game akin to Concentration, looking for the loot, the warrant and the crook, in that order. The winner of that round played the end game, placing markers on a large floor map, hoping to arrest Carmen herself and win the grand prize of a trip anywhere in the 48 contiguous United States. In the second season, this was expanded to all of North America; presumably, Hawaii was never an option.note Geographically speaking, Hawaii is not considered to be part of any continent.

Much of the show's memorability can be attributed to the terrific cast: host Greg Lee, Lynne Thigpen as Da Chief and "house band" Rockapellanote Sean Altman, Scott Leonard, Elliott Kerman and Barry Carl, who provided an a cappella soundtrack (including the famous theme song, not to mention all the wacky sound effects and ad-libbed quips).

In the successor series, Where in Time is Carmen Sandiego? (1996-97), the focus shifted from geography to history, and Kevin Shinick succeeded Lee as quizmaster. Lynne Thigpen was the only regular cast member in both versions.

Where in the World Is Carmen Sandiego? provides examples of:

Top Grunge steals all the bugs from the Amazon rainforest

Top Grunge steals all the bugs from the Amazon rainforest