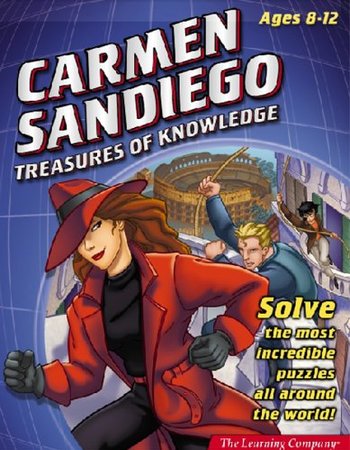 What starts out as a normal mission for ACME veteran Julia "Jules" Argent and the tech-savvy new recruit Shadow Hawkins turns into a large goose chase when Carmen begins stealing seemingly random artifacts, from a rare Franco-Italian edition of The Travels of Marco Polo to a wooden Maori carving, which Jules believes is leading to something much grander in scale.

The game divides itself into eight missions, with the first seven focused on retrieving the stolen artifacts and the final mission focused on catching Carmen.

Treasures of Knowledge takes a massive departure from previous Carmen Sandiego games; no punny names, no comedic VILE henchmen, and no humorously Impossible Thefts. The game also takes the plot quite seriously, with the few humorous lines of dialogue coming from Jules and Shadow's witty banter.