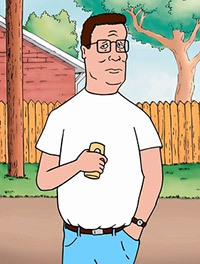 That conservative, strong-willed guy from the Deep South or Sweet Home Alabama (or maybe Texas). Often in a position of authority or government, or sometimes a Corrupt Corporate Executive (Oil Tycoons in particular) or a Simple Country Lawyer, or even a seller of propane and propane accessories, but in any case a Good Ol' Boy is a staunch Republican (or a staunch Democrat if set prior to 1964), pro-life (1970s and later), for the war in Iraq (or Vietnam, depending on the time period), and doesn't have much tolerance for anything he considers anti-American. He also knows what's best for his country, or at least he thinks he does, and doesn't need no nancy liberals with their bleeding hearts telling him what to do. (It should be noted that, until the Civil Rights Movement gained steam, many of these guys voted for liberal politicians, as the Democratic Party in the postwar era was a coalition of conservative white Southerners, blue-collar unionized workers, and social liberals for a variety of complicated reasons, like ensuring that modern-day Democrats aren't tarred with the racist brush...)

Can either be a very sympathetic or very unlikable character depending on the political persuasion of the writer. Portrayal can also differ widely from wise, uncompromising leader to lovable, simple buffoon to racist, homophobic, oil-loving bastard. Sympathetic characters may have a personal code of honor and invoke one or more positive Morality Tropes.