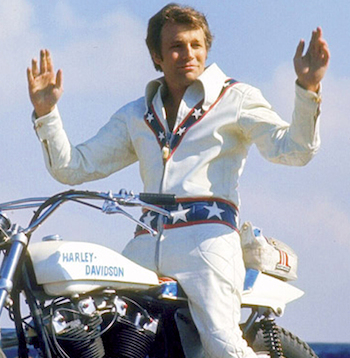 The Last Gladiator
"God never made a tougher son of a bitch than me."
—Evel Knievel, 2007
Advertisement:

Robert Craig Knievel Jr. (October 17, 1938 – November 30, 2007), better known as Evel Knievel (pronounced KUH-nee-vel) was an American daredevil, entertainer, and painter, famous around the world for his death-defying stunts, and one of the great American icons of The '70s. He attempted over seventy-five ramp-to-ramp motorcycle jumps between 1965 and 1980, including a failed jump across Snake River Canyon in a steam-powered rocket. He suffered over 433 broken bones during his career, including his back seven times, earning him the dubious distinction in the Guinness World Records as "most bones broken in a lifetime".

He was born in Montana, the eldest of two children, abandoned by his parents and raised by his grandparents. A high-school dropout, Knievel worked at the copper mines with the Anaconda Mining Company, but found work boring compared to his motorbiking hobby. After making an earth mover do a wheelie, he drove it into Butte's main power line, disrupting power for several hours and losing his job as a result. In 1956, Knievel was jailed on a charge of reckless driving; when the night jailer came around, he noted Robert Knievel in one cell and William Knofel in the other. Since Knofel was known as "Awful Knofel", Knievel began referring to himself as "Evel Knievel" to match — intentionally misspelling "evil" to avoid the connotations of the word.

After his marriage and the birth of his son, Knievel tried to support his family by various means, eventually moving his family to Moses Lake, Washington; he worked at a motorcycle shop, where motocross racer Jim Pomeroy taught him how to do a "wheelie" and ride while standing on the seat of the bike. Recalling the Joie Chitwood Auto Daredevil shows of his youth, he decided to do the same thing with his motorcycle. Promoting the show himself, Knievel proceeded to jump a twenty-foot-long box of rattlesnakes and two mountain lions.

Inspired by his success, Knievel went looking for someone to sponsor him, and found a motorcycle distributor who agreed to back the "Evel Knievel and His Motorcycle Daredevils" show. The debut was a huge success, and the offers soon flowed in. Knievel's reputation grew when he one-upped similar performers by jumping cars and vans. With each successful jump, the public wanted him to jump one more car. Knievel obliged them, not always successfully, but even his failures yielded publicity, and Knievel received national exposure when actor Joey Bishop had him as a guest of The Joey Bishop Show.

While visiting Las Vegas, Knievel decided to try jumping the fountains in front of the Caesars Palace casino, posing as lawyers from ABC Television to do so. A motorcycle malfunction caused him to crash in front of an audience of thousands, putting him in a coma for several weeks. His subsequent recovery made him even more famous than ever; ABC paid him handsomely for the rights to his film of the jump, even as his doctors were telling him that he might eventually end up crippling himself for life.

By 1968, Knievel returned to jumping, earning approximately $25,000 per weekly performance. In the early seventies, he made numerous crowd-packing jumps, including back-to-back performances at the Houston Astrodome in 1971, nineteen cars at the Ontario Motor Speedway, and fifty stacked cars at the Los Angeles Memorial Coliseum in 1973 (his first appearance on ABC Television's "Wide World of Sports"). He attempted to leap the Snake River Canyon in Idaho in 1974 using a custom-built steam-powered rocket, but the drogue parachute deployed early, dragging him back into the canyon even after clearing it. Knievel announced his retirement several times after that, but would inevitably return to motorcycle jumping; he only stopped in 1976 after a failed rehearsal caused a cameraman to lose an eye. Afterward, Knievel retired from major performances, limiting his appearances to promotional shows for his youngest son, Robbie Knievel. Evel Knievel's last appearance was in 1981.

Evel Knievel was a major American icon in The '70s, in no small part due to his relentless efforts to promote his own image as "The Last Gladiator". He became a national icon thanks to ABC's Wide World of Sports, appearing seven times in three years; his 1975 jump of 14 Greyhound buses at King's Island amusement park remains the show's highest-rated, and five of Knievel's appearances still rank among the show's top twenty. He sought endorsement deals with various motorcycle companies, was featured in a movie and two made-for-television films, recorded a self-titled album in 1974, and made numerous appearances on Talk Shows and television programs. The Ideal Toy Company released a series of Knievel-related merchandise, toys, and dolls, grossing more than $300 million worth, while Bally released a pinball machine about him in 1977. Evel Knievel was inducted into the Motorcycle Hall of Fame in 1999, on the 25th anniversary of the Snake River Canyon jump, and Jeff Beck produced a rock opera based on Knievel's life in 2003.

Knievel died of pulmonary disease in 2007, at the age of 69. In 2008, Six Flags St. Louis debuted The Evel Knievel Roller Coaster at the park, and Knievel's son Robbie jumped a motorcycle over 25 Dodge Chargers as part of the commemorative season. In 2010, a special exhibit entitled "TRUE EVEL: The Amazing Story of Evel Knievel" premiered at the Harley-Davidson Museum in Milwaukee.