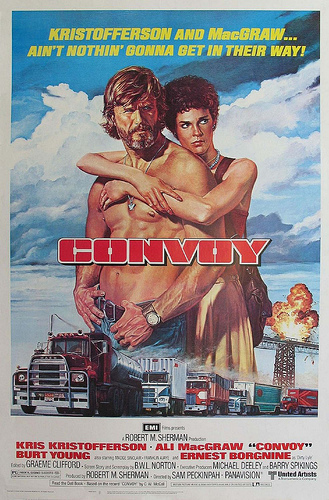 "Arizona, noon, on the seventh of June, when they highballed over the pass,
Bulldog Mack with a can on back, and a Jaguar haulin' ass.
He's ten on the floor, stroke an' bore, seat cover's startin' to gain.
Now beaver, you a-truckin' with the Rubber Duck, an' I'm about ta pull the plug on your drain."
Advertisement:

It's Vanishing Point... with trucks!

Convoy is a 1978 action film directed by Sam Peckinpah, based on the 1975 country/western and novelty song "Convoy" by C.W. McCall. In 1978, the National Maximum Speed Law which prohibits speeds exceeding 55 mph is in full force, and the country's truck drivers don't much like it. Martin "Rubber Duck" Penwald (Kris Kristofferson) is one such driver, just going about minding his own business. When he and some friends — Melissa (Ali MacGraw), Pig Pen (Burt Young), Spider Mike (Franklyn Ajaye), and Widow Woman (Madge Sinclair) — run afoul of corrupt Sheriff "Dirty Lyle" Wallace (Ernest Borgnine), a fight breaks out at a truck stop and the bunch are forced to flee in their trucks, the police in pursuit. Heading for the Mexico border, dozens of other truckers join them in their own trucks, until the eponymous convoy emerges, over a mile long. They communicate by means of CB radio. Rubber Duck, heading up the front, is thrust into the status of a folk hero. Will they evade the authorities and make it?

Has little if anything to do with Optimus Prime's Japanese name. Has basically no relation to the 2015 roguelike game.