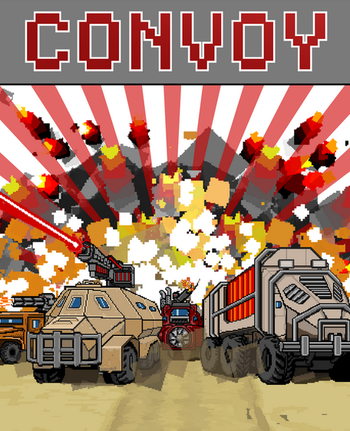 Convoy is Roguelike game that describes itself as a mix of FTL and Mad Max. It was developed by Convoy Games and published by Indietopia Games on April 21st, 2015, after first getting funded

on Kickstarter and spending some time in Steam Early Access.

At the start of a new game, you pick your main vehicle type (though all but one need to be unlocked through beating challenges) and the two supporting ones you'll start with. Then, the few paragraphs of text outline your situation as an officer on a spaceship that got so battered by an ion storm it had to make an emergency landing on the desert planet of Omek Prime, and now needs to obtain four replacement parts there in order to fly again. Of course, it won't be easy, as the planet is utterly lawless, and the only way to deal with the threats from raiders, privateers and T.O.R.V.A.K. is to travel in the titular convoys.

No relation to 1978 film by Sam Peckinpah. However, see Skyshine's Bedlam for another 2015 Sci-Fi / Post Apocalyptic roguelike set on a desert planet.

Tropes travelling in this convoy: