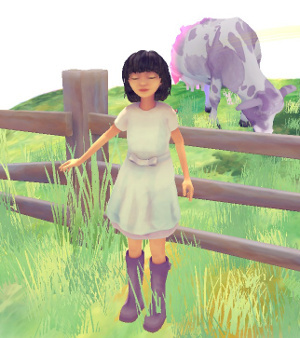 Beyond Eyes is a 2015 Environmental Narrative Game for PC, X Box One and PlayStation 4, developed by Dutch indie game studio Tiger & Squid, and published by Team17. You play as a girl named Rae walking around serene, nearly deserted suburban environments in search for her lost cat, Nani. The twist? She is blind, so she has to rely on other senses to explore the world around her, which are represented as a dream-like pastel-colored landscape that shifts and morphs around Rae as she learns more about it.
Advertisement:

There are no enemies, nor any puzzles more complex than "bring object A to point B". It is perhaps one of the definite examples of the phrase "walking simulator" as nearly the entire gameplay consists of slow, cautious walking. It is, however, beautiful, inspirational, and just short enough not to wear out its welcome.