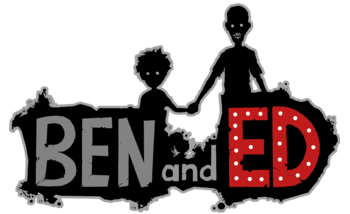 A zombie game with a twist. Ben and Ed puts you in the running shoes of Ed, an athlete who died of a heart attack minutes after winning the Candy Fun Marathon silver medal and became the first undead. Days later, he was found and befriended by a young boy named Ben. This was not to last, as later they came to the attention of Hans Showmaster, who kidnaps Ben in order to "persuade" Ed to take part in his new show "Rundead".
Advertisement:

The gameplay seems relatively simple on the surface. Get from point A to point B in an obstacle course. The twists come from the sheer volume of large blades and laser beams seeking to chop you up. Sound problematic? Just remember that you're a zombie. It doesn't matter if you lose an arm/leg or two, or even your head!

Released on Steam, the game can be found here

The ending is very SPOILERTASTIC! You Have Been Warned.

A sequel known as "Ben and Ed: Blood Party" has been released.

THE SHOW MUST GO ON
PRESS ENTER TO RESPAWN.