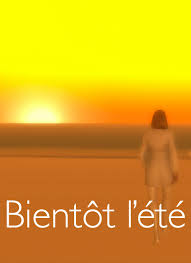 Bientôt l'été is a French indie video game, released in February 2013 and developed by Tale of Tales

, who also created The Path. The title is roughly translated as Summer’ll be Soon, or Summer is Coming. It is set in the far future where humans have expanded far enough into space to form intergalactic networks, which allow nearly-seamless cyberspace communication between people. You assume the role of a man or woman who uses that interface as the only means to communicate with their lover, who are light years away.
Advertisement: