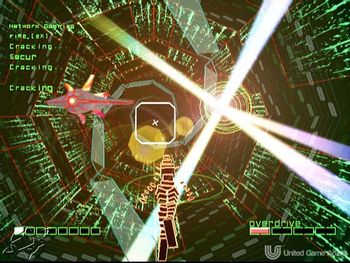 "Cyberspace. A consensual hallucination experienced daily by billions of legitimate operators, in every nation, by children being taught mathematical concepts... A graphical representation of data abstracted from the banks of every computer in the human system. Unthinkable complexity. Lines of light ranged in the non-space of the mind, clusters and constellations of data. Like city lights, receding."
— William Gibson, Neuromancer
Advertisement:

The idea of a gateway to Another Dimension is quite old. Sometimes the dimensional gateway would appear to be a mirror or book. A computer is both of these. "Cyberspace" is the dimension it opens.

Rather than go Down the Rabbit Hole into a Spirit World, the character puts on some VR goggles, plugs an Ethernet cable into his skull, or gets "digitized" into data. What do they see when they go online? A pretty nifty 3D world, designed as a Viewer-Friendly Interface made up of Holographic Terminals over a background full of Matrix Raining Code superimposed over Tron Lines. Not only is everything online, you can expect "surfing" from one site/database to another to be handled with all the aesthetic aplomb of a Design Student's Orgasm and to be completely lagless.

One curious alternative idea that seems to infest many cyberspaces is travel time... The Metaverse of Snow Crash has people walking to the shops on The Internet. This could be seen as the illogical conclusion to the increasingly graphical user interface design evolution from the concise but user-unfriendly command line to drag-and-drop windows and pointers and presumably to the final stages where your avatar crumples up your virtual document and walks over to the virtual bin with it. People in the future clearly have a phenomenal amount of patience with their user interfaces. Essentially, Cyberspace is stylized into a simulation that's virtually indistinguishable from real life, and less of a recreational pastime or tool.

If there are other webizens or hackers in cyberspace (not to mention AIs and ghosts), they will either be amorphous gobs of light, be completely outlandishly dressed (or have non-human avatars) because there are no physical limitations, or appear exactly as they would in real life (even wearing the street clothes they were wearing as they logged on).

Sometimes, a Holodeck Malfunction turns Cyberspace outright dangerous — not just online, but in real life, because Your Mind Makes It Real. It may take an Orphean Rescue to get those trapped out.

Frequently pops up in Cyberpunk and Post-Cyberpunk settings. See also The Metaverse, which is when society at large uses the Internet this way. Compare Platonic Cave, Hard Light (where Cyberspace can manipulate the physical world), and Inside a Computer System (which may be completely self-contained and have no connection to the outside world or other people).

Consult the Virtual Reality Index for media that makes use of cyberspace in Real Life.

In order to end Reaper influence over the Geth, Legion uploads Shepard to a Geth server hub - complete with visual filters allowing them to make sense of the raw data.

Alternative Title(s): Inside The Internet

In order to end Reaper influence over the Geth, Legion uploads Shepard to a Geth server hub - complete with visual filters allowing them to make sense of the raw data.