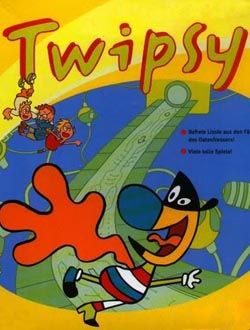 Originally designed in 1995 by Javier Mariscal to be the mascot for Hanover 2000 Expo, Twipsy starred his own cartoon in 1999 which included 26 episodes in total.

The basic premise tells about a boy named Nick who accidentally gets transported to the cyberspace through his friend's computer game and where he meets the titular Twipsy, an e-mail courier who's job is to literally speed along the information superhighway with tiny e-mail envelopes and make sure that the mails don't get lost or in the hands of viruses or other malicious programs. Eventually Nick's sister Lissie and his friend Albert manage to get Nick back with the aid of Twipsy, and by combining a printer and a scanner they create a device that works both as a portal to cyberspace and can bring Twipsy to the real world.

Not much info can be found of this series, but YouTube still has one of the intros.

As of early 2020, it's available on Amazon Prime Video in the US, and likewise, has been Rereleased for Free on YouTube by Studio 100.

The credits for Twipsy, which resemble that of a computer desktop.

The credits for Twipsy, which resemble that of a computer desktop.