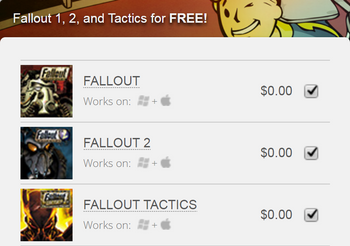 When the rights are expiring, you might as well.
Sometimes, the people who own the copyright for a certain commercial product decide to re-release said product to the general audience as a free product.
Advertisement:

Reasons for doing so vary. Sometimes, the product is not doing well, and the people who own the rights don't want the product's community to die out and/or want to keep the product from falling into Keep Circulating the Tapes. Other times, it's being given out as a celebration of some event.

A variation is when the product is only released for a certain amount of time before it stops being commercial.

Another variation is when something becomes free only for a limited amount of time before it stops being free.

May result in said product becoming either an Allegedly Free Game or Freemium. Compare Abandonware.