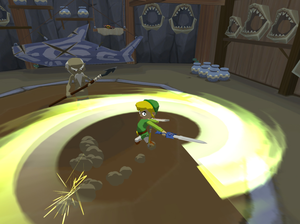 (While you're on this page, listen to You Spin Me Round.

It will make the page even better. Why? Because spinning, that's why.)

Presumably, this trope is the case because fast-moving things are generally better than slow moving things, and circular motion allows something to accomplish this while actually remaining on-screen.

This trope shows off the awesome power of spinning things at high speeds, or flying around in a circle. In skilled hands, this ability can be used to create tornadoes or even bend the space-time continuum.

Spinning makes pretty much everything cooler, so these are just a handful of the subtropes heavily affected: