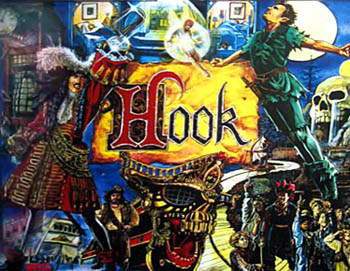 Hook: "What do we have here?"
Advertisement:

Hook is a Licensed Pinball Table based on the winter 1991 Steven Spielberg movie starring Robin Williams and Dustin Hoffman. It was designed by Tim Seckel, illustrated by Paul Faris, and released by Data East in January 1992.

The game is infamous for encapsulating key events of the movie in a package with beautiful artwork and rousing music, then slathering it with wildly unbalanced gameplay and an incomprehensible ruleset; even today, the only advice for players is to shoot in random directions and wait to be inexplicably awarded big points. Collect weapons from the Lost Boys, visit Pirate Town, and shoot Skull Island to start the Bangerang — or just build up the Windcoaster Ramp and harvest three million points per shot until you get bored.

Word of God is that the game was originally conceived as a Universal Studios Theme Park game; during the design stage, Data East secured the rights to Hook and the game was updated accordingly.