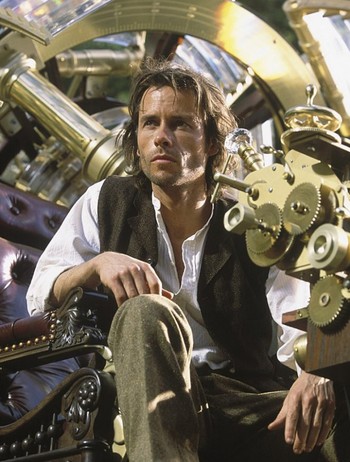 The Time Machine is a 2002 science fiction film directed by Simon Wells, loosely adapted from the classic novel of the same name by his great-grandfather H. G. Wells. More precisely, it's adapted from the 1960 film adaptation (whose rights had been owned by Warner Bros., the international distributor of the 2002 version, since 1996), with the writer of that version, David Duncan, even receiving a "based on the screenplay by" credit.

The Time-Traveler is Dr. Alexander Hartdegen (Guy Pearce), scientist and inventor. Alex sometimes comes off as overly optimistic and absent minded to his friend David Philby (Mark Addy) and his doting housekeeper Mrs. Watchit (Phyllida Law). The plot is set in motion when just after proposing to his girlfriend Emma (Sienna Guillory) the pair is mugged, and being unwilling to surrender the engagement ring she is shot and killed. Alex becomes a shut-in devoting all of his time and energy into making his theoretical time-machine into a reality. However You Can't Fight Fate comes into play, and his attempts to save her only result in death employing other means to find her.

Reasoning that if he discovered the secret to time-travel someone else eventually would, Alex decides to skip the years of maturation of the technology and travels forward in time, hoping to find an answer to why he cannot change the past. He arrives in the year 2037, where human efforts to colonize the moon have ended in disaster causing the moon itself to breakup and pelt the Earth with meteors. While attempting to flee this time line he is wounded and knocked out while his time machine continues forward. By the time he comes to the machine has spirited him to the year 802,701.

Here the Eloi are portrayed as Magical Native Americans, and lean very hard on Acceptable Breaks from Reality to be able to understand his language. Alex begins to make friends among the Eloi, including Mara (Samantha Mumba). Shortly thereafter Mara is kidnapped by the Morlocks, and with the Eloi too frightened to attempt a rescue he resolves to do so himself.

In the lair of the Morlocks, Alex meets the Über-Morlock (Jeremy Irons), who controls the Morlocks (and spies on the Eloi) through telepathy. Knowing who and what Alexander is, the Über-Morlock shows him a vision wherein his wife never dies, and as a result he chooses to spend his time with her and with his family rather than on building his time-machine. Now having given him the answer to the question of why he couldn't change the past, the Über-Morlock chooses to direct Alexander to return to his own time. But with nothing to return home to, Alexander chooses to fight the Über-Morlock and converts his time machine into a bomb to destroy the Morlocks, hopefully freeing the Eloi from their predation. The movie ends with Alexander finally coming to terms with the events he cannot change, and moving on to live in the new time in which he has found himself.

Tropes from the 2002 film version which weren't in the book: