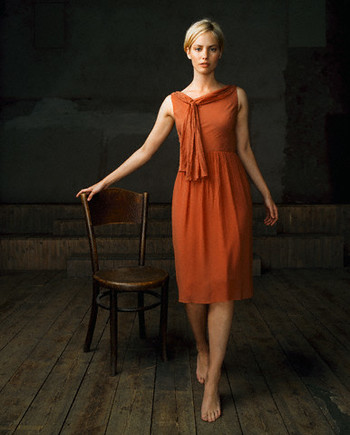 Sienna Tiggy Guillory (born 16 March 1975 in Kettering, England) is an English actress and model. She is known for playing Jill Valentine in the Resident Evil Film Series. She also starred in The Time Machine (2002), the TV two part series Helen of Troy (2003), Eragon, Gunless and a small part in Love Actually.

She is the daughter of Cuban-born American/Turkish-Jewish guitarist Issac Guillory. When she was 10, her family moved to Mexico with her cousins to learn Spanish.

Her family are friends with Helen Mirren, who Sienna looked up to when she had aspirations towards acting.

As a model, she worked in campaigns for Armani, Dolce & Gabbana, Burberry, and Paul Smith and appeared on the covers of several fashion magazines. In 1999, she became the face of the Hugo Boss fragrance campaign

In 2002, she married Enzo Cilenti, In August 2004, they cycled five stages of the Tour de France to raise money for charity. They have twin daughters, Valentina and Lucia Cilenti born in February 2011.

She dislikes being famous: "I went out the other night for the first time in ages, just because I'd been so busy. As I came out of the cinema, I ran down the street to get cigarettes, and 30 guys followed me with cameras and shouted at me. It's all so strange. It's not a life I really live or understand."