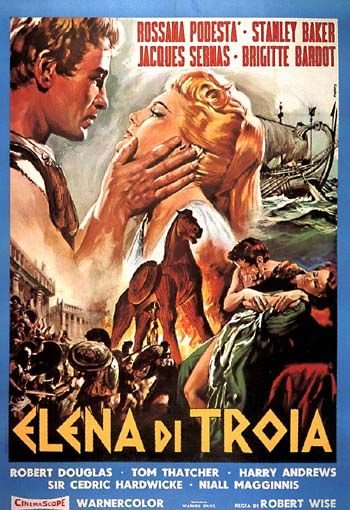 Helen of Troy is the name of two films and one television miniseries. All three are adaptations of Homer's The Iliad.

The first film, from 1924, is a German-made film, the original title being "Helena." It was directed by Manfred Noa and featured many actors who never made it big in the film industry. Until recently it was believed to be a lost film and was rediscovered. It has since been remastered and is considered one of the jewels of German cinema.

The second film, from 1956, is an American-made picture directed by Robert Wise, with a cast that includes Rossana Podesta as Helen, Jacques Sernas as Paris, Cedric Hardwicke as Priam, Stanley Baker as Achilles, and Brigitte Bardot as Andraste. Though critics were less than kind, the film was a box-office hit and has since become the go-to example for films set in The Trojan War, even to the point that footage from this film is shown in documentaries. It has had quite the influence on the later theatrical film adaptation, 2004's Troy.

The television miniseries from 2003 came out a full year before the aforementioned Troy. It features such actors as Sienna Guillory as Helen, Matthew Marsden as Paris, James Callis as the narrator Menalaus himself, Rufus Sewell as Agamemnon and Maryam d'Abo as Queen Hecuba. It includes such episodes from the mythology as Theseus' abduction of Helen, the Judgement of Paris and even the Oath of Tydareus.

Helen of Troy provides examples of:

open/close all folders
The film
The miniseries