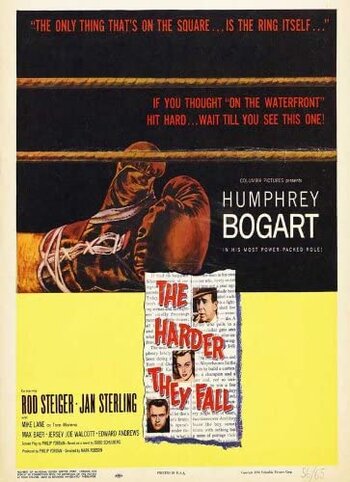 "The fight game today is like show business. There's no real fighters anymore, they're all actors. The best showman becomes the champ."
— Nick Benko
Advertisement:

The Harder They Fall is a boxing-themed 1956 Film Noir directed by Mark Robson, starring Humphrey Bogart and Rod Steiger.

Eddie Willis (Bogart) is a formerly-well-known sports columnist who finds himself unemployed after the newspaper he writes for folds. He receives a job offer from Nick Benko (Steiger), a deeply corrupt boxing promoter, to serve as press agent and publicist for Nick's new fighter, an Argentinian lummox named Toro Moreno (Mike Lane). Eddie isn't thrilled about working for a slimeball like Nick, but, lacking better options, he accepts.

Eddie sees Toro sparring in the ring and is surprised to find out that Toro, despite his enormous size and strength, is actually a terrible boxer: slow, weak at punching, and the owner of a glass jaw. Nick then explains his real plan, which is to build Toro up into a contender by matching him up against a series of palookas who will all be paid to take a dive. Eventually this will pay off with a match against heavyweight champion Buddy Brannen, which will earn Nick (and supposedly Toro) a huge windfall. Eddie reluctantly goes along with the scam, helping build up Toro into a sensation, but is unprepared for the lengths Nick will go and the depths Nick will sink to in order to make some money.

Last film for Humphrey Bogart, made when he was already suffering from the cancer that killed him less than a year after this film was released. Real Life boxing champions Max Baer and Jersey Joe Walcott appear as, respectively, Buddy Brannen and George, Toro's trainer.

The Harder They Trope: