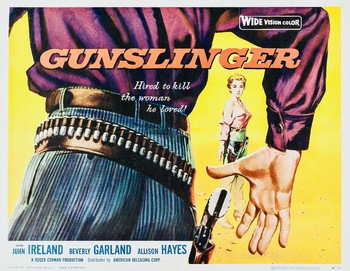 Cane Miro: I'll make you a deal: I won't try to make you a bad woman, if you stop trying to make me a good man.
Rose Hood: You're not bad, you're just no good.
Advertisement:

When Marshal Hood of Oracle, Texas, is killed by a hired gunman, his quick-shooting widow, Rose (Garland), straps on his gun and star, puts on some pants, and aims to find out who did the hiring. She has her suspicions about the local saloon owner-slash-brothel madam Erica Page (Hayes), but doesn't have any proof. Still, Erica becomes worried about Rose interfering with her railroad real estate scheme, and sends for a hired gunman to take care of her.

The gunman, Cane Miro (John Ireland), hits it off with Rose soon after arriving in town, and begins trying to stretch the terms of his contract to avoid killing her. However, he has an old Civil War grudge against the town's mayor, and Rose finds her hands full trying to keep the man alive and Cane out of trouble. Can Rose stop Erica's plan? Will Rose redeem Cane before it's too late?