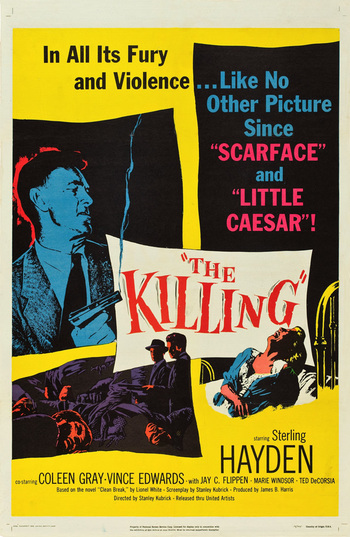 The Killing is a 1956 Film Noir directed by Stanley Kubrick.

It follows the last heist of career criminal Johnny Clay (Sterling Hayden). With 2 million dollars at stake in the racetrack counting room, Clay sets up an elaborate plan to get the money and get everyone involved their share. At the time of the heist the film splits off to show the perspective of every character involved in the heist.

The Killing has become a Cult Classic and is considered to be Kubrick's first masterpiece.

The 1996 collaboration between musicians John Zorn and Eugene Chadbourne, "In Memory of Nikki Arane" (1996), is a reference to a character from The Killing and also featured on the cover.